Pontederia cordata, common name pickerelweed (USA) or pickerel weed (UK), is a monocotyledonous aquatic plant native to the American continent. It grows in a variety of wetlands, including pond and lake margins across an extremely large range from eastern Canada south to Argentina. The species grows as an emergent plant, that is, in flooded conditions, so the plant is generally dependent upon aerenchyma in the stem to carry oxygen into the roots. Its metabolism, is, however, also tolerant of low soil oxygen. It is often found in areas where water levels fluctuate naturally, with spring flooding and later summer emergence. Apart from flooding, the species is also influenced by soil fertility, tending to grow in the more fertile bays of large lakes, for example. Like many aquatic plants, it is negatively affected by salinity and grazing. It is also negatively affected by competition from other wetland plants. Like many wetland plants, it can survive unfavorable conditions as buried seeds in the soil. 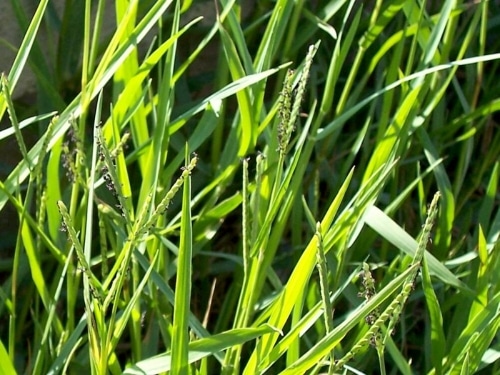